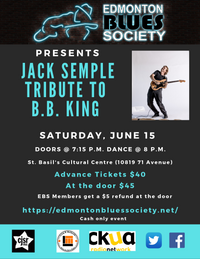 Regina’s own Jack Semple, who can make a guitar weep with the blues at the best of times, has pulled together a group of seven funk-rock players, including a full horn section, to present a scorching tribute to the late, great legend B.B. King at our next blues dance party.

Semple has reached an international audience with his songwriting, recordings and performances as a vocalist and flamenco-technique, groove-loving guitarist. Juno recipient, two-time winner of the Western Canadian Blues album of the year, and nominee for the 2019 Maple Blues Award for "Guitarist of the Year", Jack has been a fixture on the Canadian music scene for decades.

Semple first listened to King when he was 12 years old and has been a devoted fan ever since. “He’s was a total genius,” Semple says of King. “He occupied a really interesting place in blues music. Of course he could play chords, but the rhythms he played with those single notes were exactly in the pocket, just like the drummer." He continued, “With this tribute, I’m trying to recreate the happy vibe, doing my best, but it’s not easy.”

Don't wait. This show is going to be a sellout.