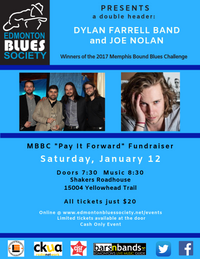 Note Time Change*Doors @ 7:30 pm and Music @ 8:30 pm
Tickets for members and non-members are $20. Buy them online here. Limited tickets available at the door. Cash only.

Dylan Farrell is a born guitarist whose playing displays a level of emotional maturity and a technical depth and dexterity that is truly remarkable for someone only in his mid-twenties. Upon moving from New Brunswick to Edmonton in 2012, he almost instantly became a fixture in the city’s thriving roots and blues scene, lending his consummate skill as a sideman to several acts, and hosting a weekly blues jam at the Have Mercy Southern Table and Bar. With the Dylan Farrell Band, he is a two-time winner of the Memphis Bound Blues Challenge, and semi-finalist at the 2018 International Blues Challenge in Memphis, TN. While in Memphis, Dylan recorded his debut LP which was released in the fall.

While it’s not every day that a songwriter makes it from the shadows of open mic nights to the high wattage, real deal scene, Joe Nolan’s old soul lyrics and striking vocals suggest that the odds of breaking through are in his favour. Joe Nolan’s distinctive and intimate vocals stack the deck. From the ramin tremors to raw howls, his range of expression reaches extremes. The songs are fervent, pressing and intense, attuned at once to the world of youthful melodramas in which Joe, an artist in his early 20s lives, and an older, deeper level of human experience. Even in the spotlight, the lyrical contours of Joe Nolan’s confessions retain their mystery. Tornado, a collection of songs that befit a rising star in the songwriting world, was released by Six Shooter Records on January 28, 2014.